Blue skies, a public bank holiday and steam engines!  What could be more exciting! 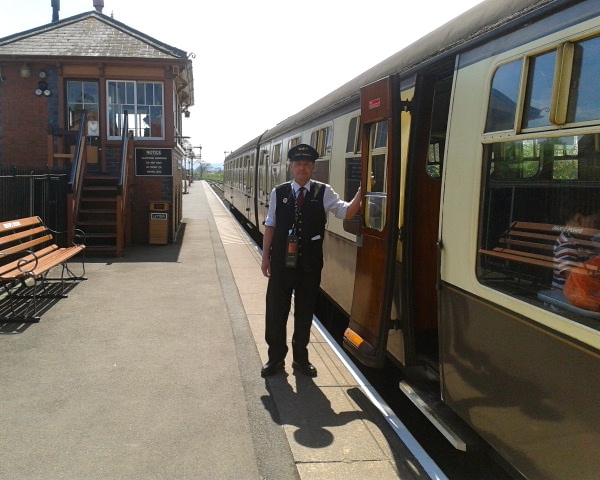 The West Somerset Railway had 7 steam locomotives running from Bishops Lydeard to Minehead and back. Even better, if you buy a day rover ticket you can hop on and off at any of the stations on the way. Great idea.

Having arrived at Bishops Lydeard station, I was amazed to find that the car park was full!  Incoming traffic was directed across the road into the overflow car park, where the car park attendant  kindly informed us that the steam engine was about to depart.  He radioed ahead to let the station master know that more passengers were on their way!  Modern technology meets old!

Bishops Lydeard itself a charming little village with a fully restored watermill, which has a working water wheel. But most importantly it is the beginning of the West Somerset Steam railway line to Minehead.

Platform 1 has The Guage Museum which is the home to items of local rail interest, showing how the railway affected workers on the line (and the people who used it), and there is a working model railway here. On Platform 2 there is the ‘Whistle-Stop Café.

Bishops Lydeard Station opened in 1862 and is now home to the West Somerset Railway Association, supporting charitable body of the Railway who recruit and look after the volunteers and some of the locos on the line.

The volunteers are extremely hard working and knowledgeable and made my day!  A big thank you to all who allowed me take their photos and chat with them. 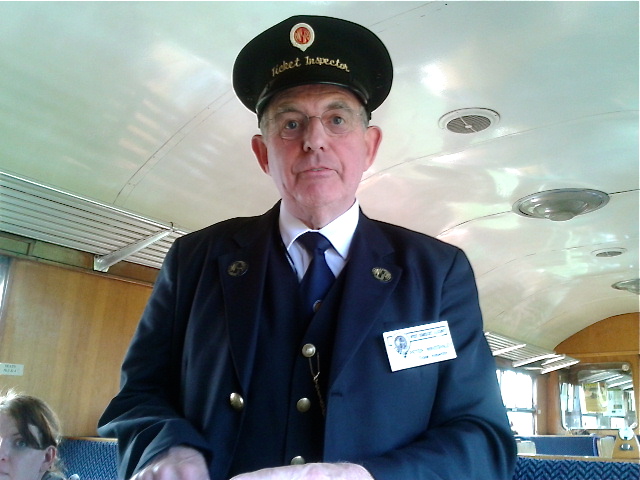 Climbing on board the train was like taking a step back in time. 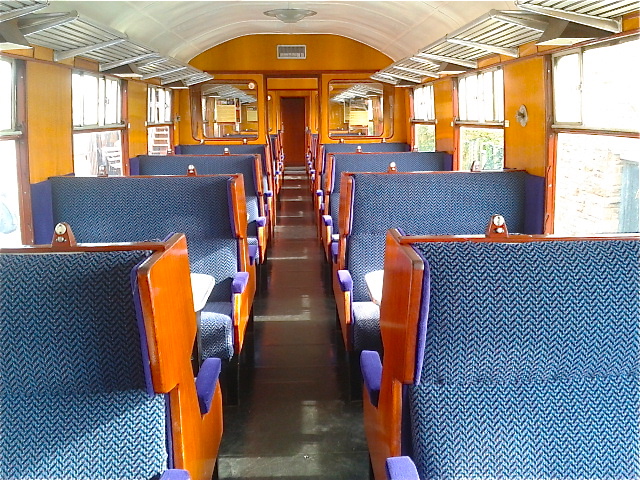 The carriages have been beautifully appointed and restored, the engine whistled, the station master waved his green flag to show that all was well….

We were off chuffing our way through the heart of the Quantock Hills in Somerset. 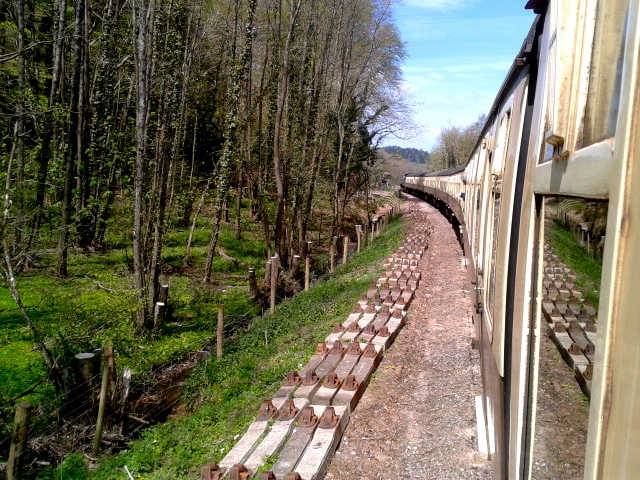 Next stop Crowcombe Heathfied  (which is miles from anywhere)  and dates back to 1860 with its claim to fame including Ringo Starr (of the Beatles fame) riding a bike down the platform in A Hard Days Night and in the opening sequence of Land Girls. 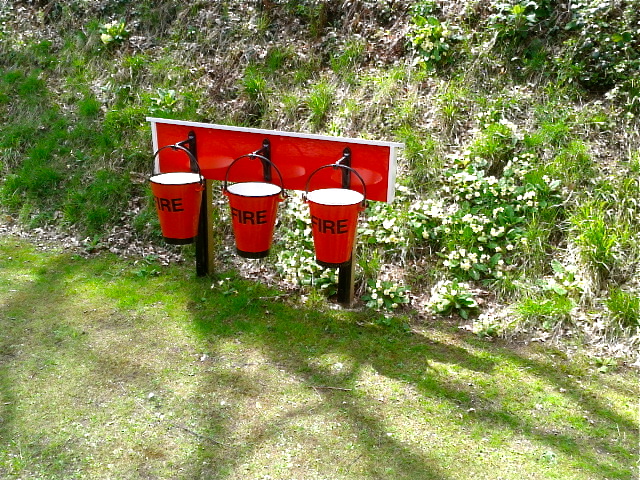 We chuffed on through rolling farmland and beautiful countryside. 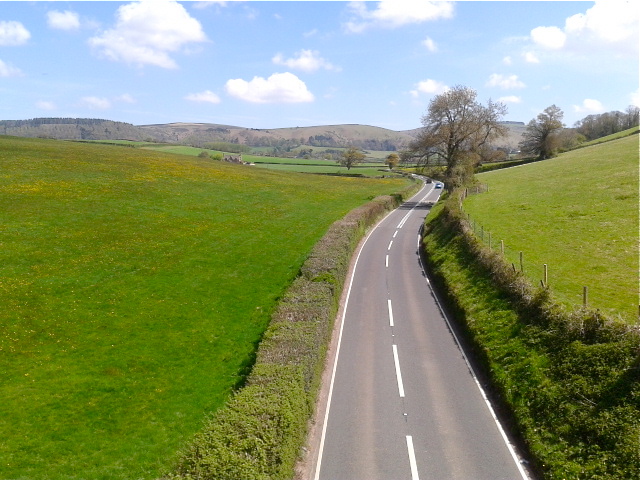 Next stop Stogumber. Brilliant name and a delightful village!  The station has been through many changes including a succession of much loved station masters. Today 17 staff work on the station, and between them all, they manage the buildings, gardens and platform. The old cattle dock will, when complete, give an unrivalled view  of trains working hard through the station – great for photographers. 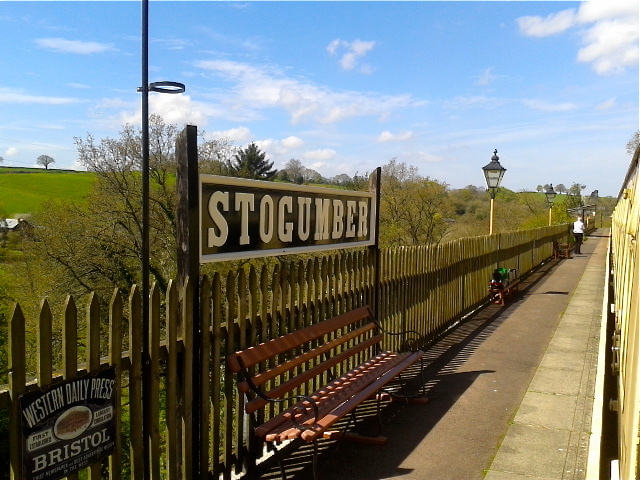 Next stop Williton. A small town with news agents, banks, café and bakery, police station and the Bakelite Museum.  The station itself has all sorts of goodies! The gap between the two lines of track is wider that normal.  This is as a consequence of the tracks that passed here being Brunel’s Broad Gauge of 7 feet and a quarter inch, as opposed to the current standard gauge of 4 feet 8 and a half inches.  The signal box is the only remaining box from the Bristol and Exeter Railway. The goods shed is now the home of the Diesel and Electric Preservation Group – D&EPG- wonderful people who are dedicated and passionate about up keep and maintenance of the Diesel locos built in the 1960s. 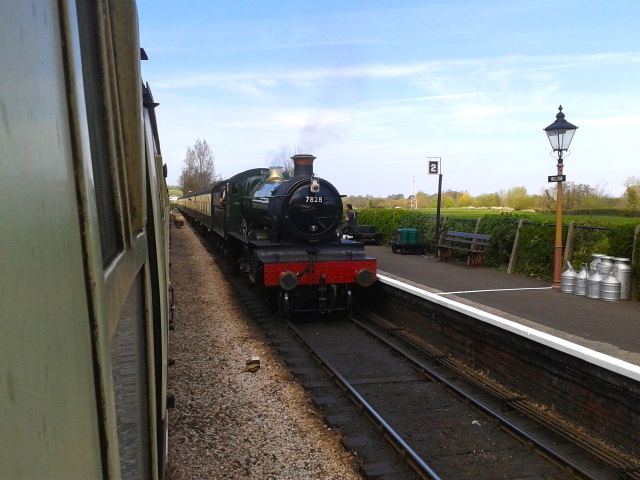 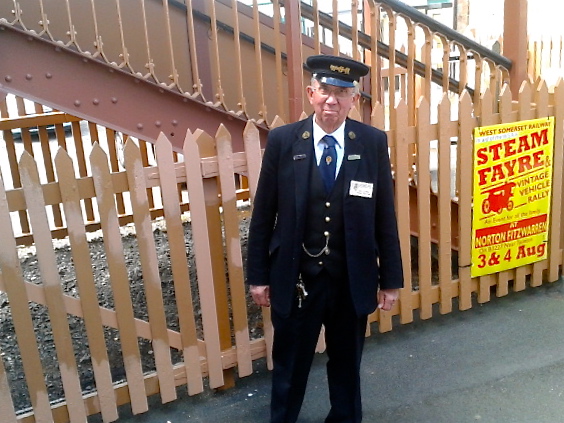 These diesel locos and were all sadly withdrawn from use by British Rail between 1970 and 1990. 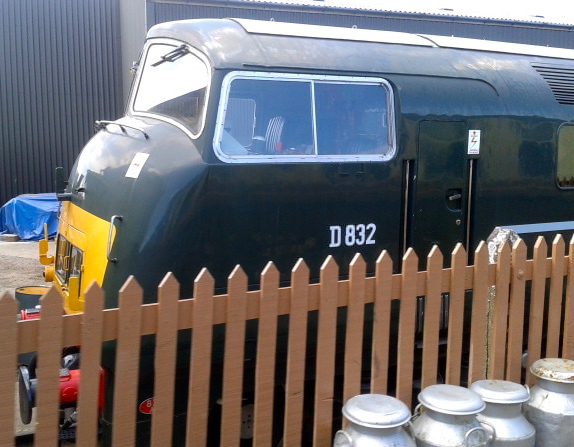 At this point it is probably obvious that I am an old train spotter!! I love these old diesels. Imagine my delight when I saw a Warship and Crompton on the sidings!

Next stop Doniford Halt a tiny request stop. There is no parking or loos here! There is however a large Haven Holiday Centre, and the station was built in 1980 to serve it.

Next stop Watchet , is the original terminus of the West Somerset Railway in 1862, and strangely is at right angles to the railway line. There is a pictorial display of the history of the railway in the waiting room. The station is in the middle of the town next to the harbour/marina where a 1950’s vintage motor torpedo boat is housed. The former goods shed is all that is left of the siding (which served the docks) and is now a Boat Museum. With over 1000 years of history, Watchet’s museum tells of how the West Somerset Mineral Railway once bought iron ore from the Brendon Hills for onward shipping to the furnace at Ebbw Vale South Wales. The track bed of this mineral railway is now used as a footpath. 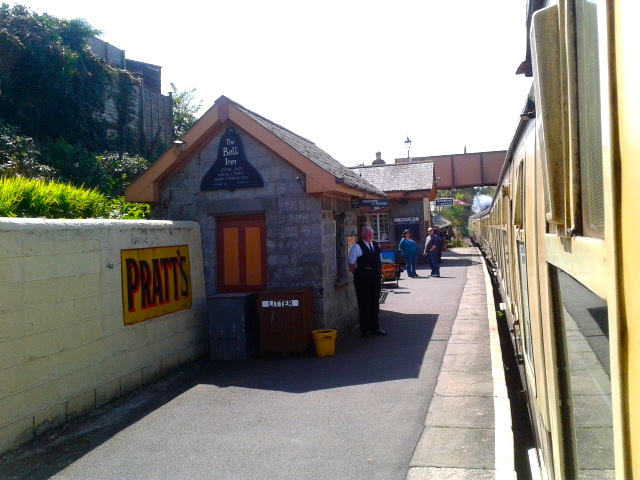 Next stop Washford , opened in 1874 and painted in Southern Region colours is now home to the Somerset and Dorset Railway Trust. The museum and workshop are on the site of the old Goods shed and yard. Just a few minutes walk from the station is English Heritage’s Cisterian Abbey,  Cleeve Abbey.  Calm, relaxing and a fascinating insight into monastic life. The grounds are worth a peek too. 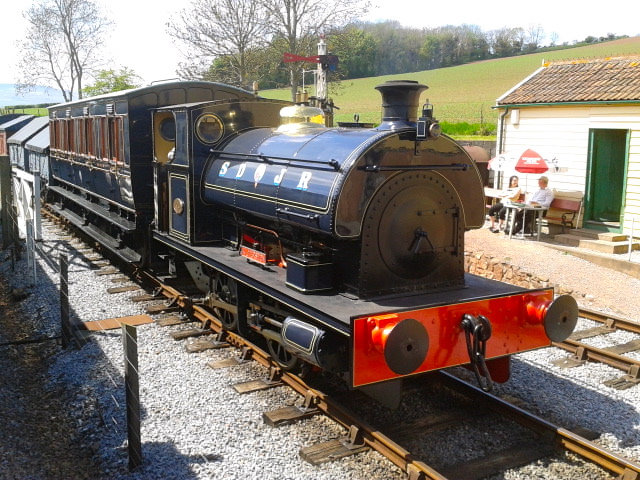 Next stop Blue Anchor – which was formerly known as Bradley Gate – has two long platforms and level crossing gates- are operated by the capstan wheel. This sea-side town has become more and more popular. 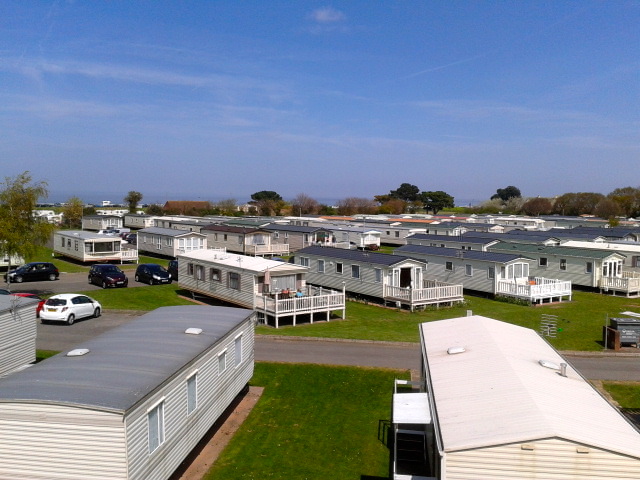 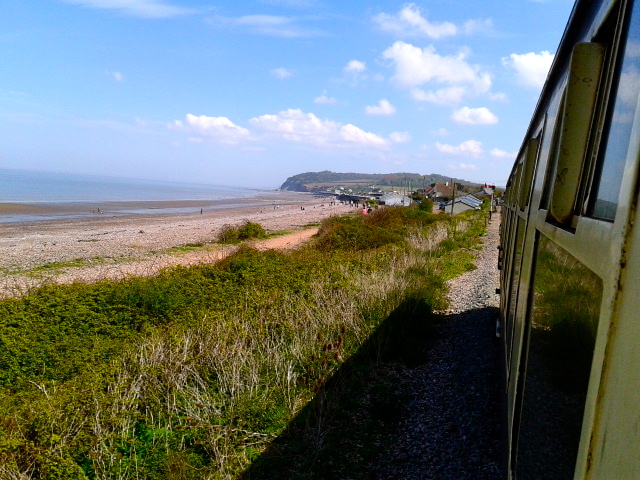 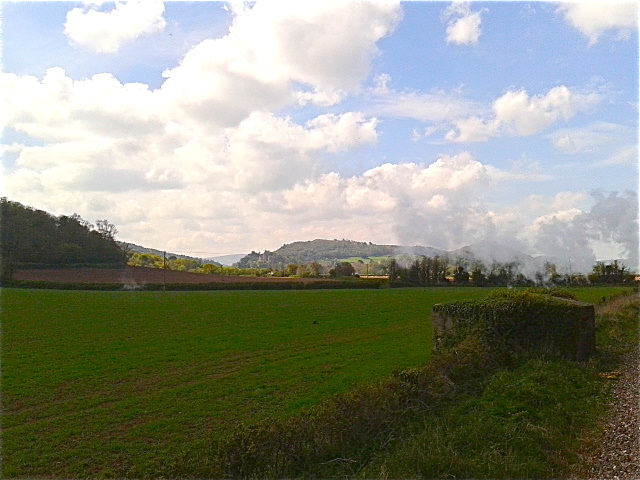 The info on this station says ‘Dunster village is approximately a 20 minute walk from the station, the latter part being gently uphill’.  Gently uphill!!! It is a long old way up, but, I have to say it really is worth a visit.  Dunster’s Norman Castle, beautiful town, the Mill and Priory, Bats Castle and views to die for are all worth a special mention.  Dunster is delightful.  There is apparently an evening called Dunster by Candlelight, on the 1st and 2nd of December each year. All electric lights are switched off, in favour of candles and oil lamps, where entertainment takes to the streets…. I think I will have to return! 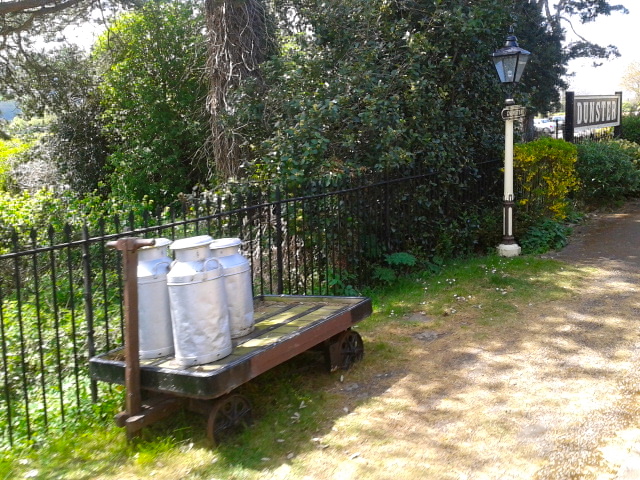 Next stop Minehead. With its quarter of a mile platform, (it is certainly required for the many holiday makers who  make their way to Butlins each summer).  Our steam engine which pulled us all the way, chuffed off to refuel, and all the passengers alighted.  This is the end of the line. There is a turntable which is used during special events where one man can single-handedly turn 165 tonnes of locomotive!  Very Impressive. 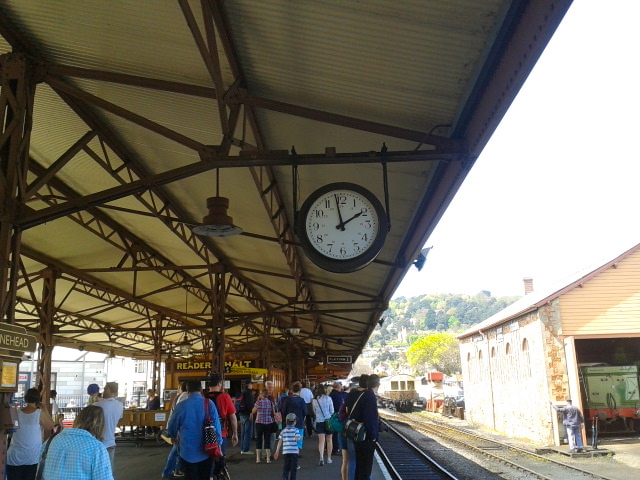 It seemed the entire motorcycling and motor biking world had turned out on this warm, sunny bank holiday too! 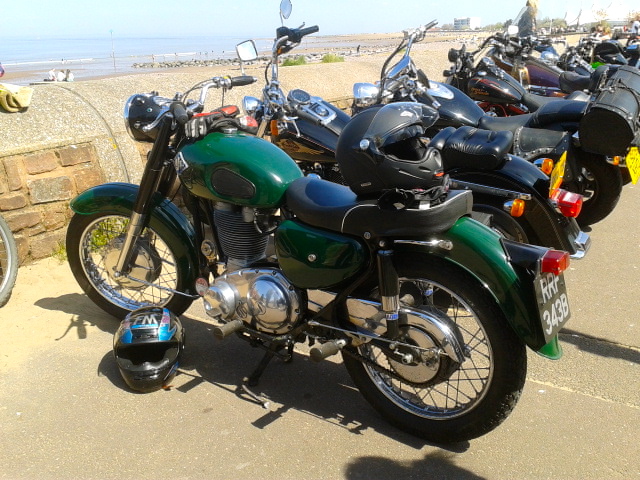 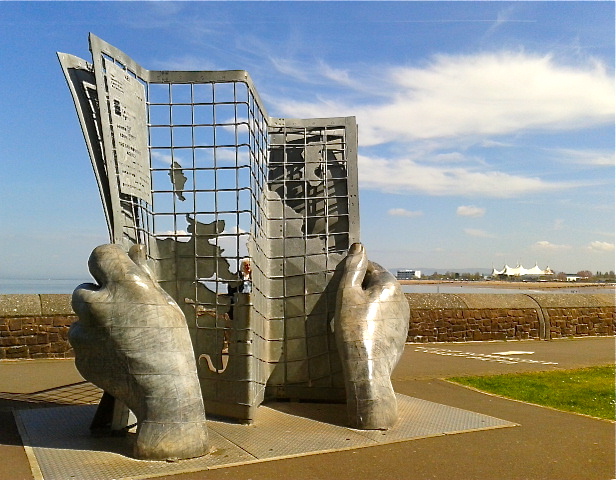 If stretching your legs is a must, then a stroll along the esplanade is a gentle way to start, and for the more energetic, North Hill, or even the South West Coast Path which starts here where you can walk to Poole Harbour in Dorset via Lands End in Cornwall!!

As Norah Jones sings  ‘…come with me together and we can take the long way home!’

The return journey was great. Children chattering, mums and dads reminiscing, but most importantly, everyone had had a wonderful day out travelling on this great old steam train.

Clip of Steam Loco 7828 at Minehead station coupling onto carriages ready for the return journey to Bishops Lydeard.   http://youtu.be/Y8xK3s9cX_Q 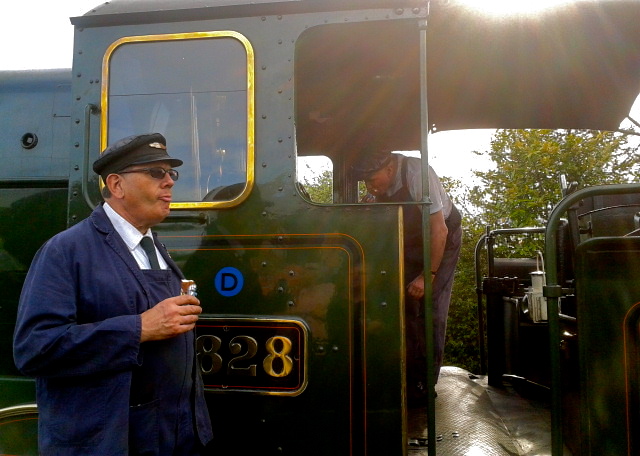 Each year the West Somerset Railway have ‘Special Days’ – its well worth checking!  http://www.west-somerset-railway.co.uk/ 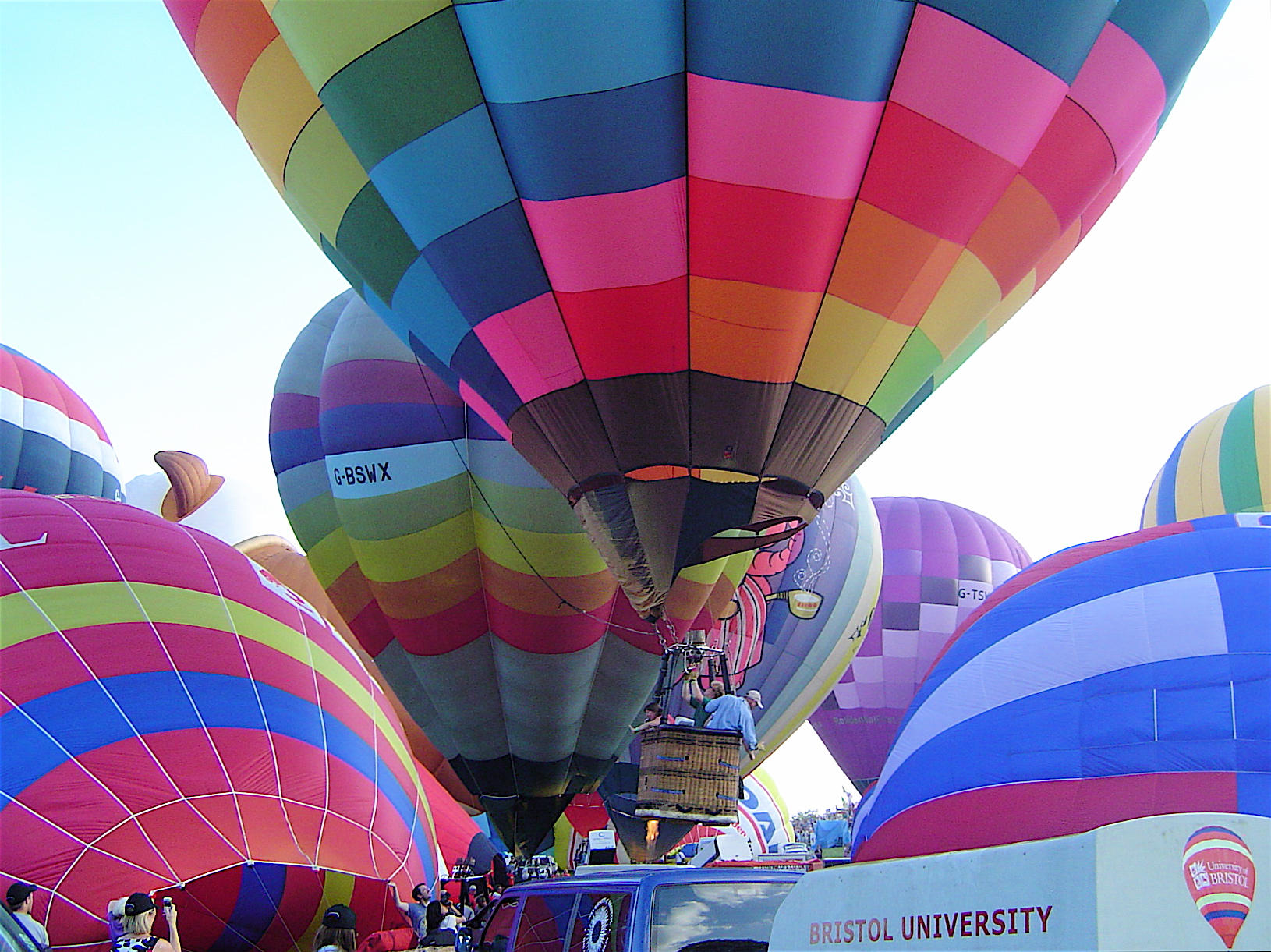 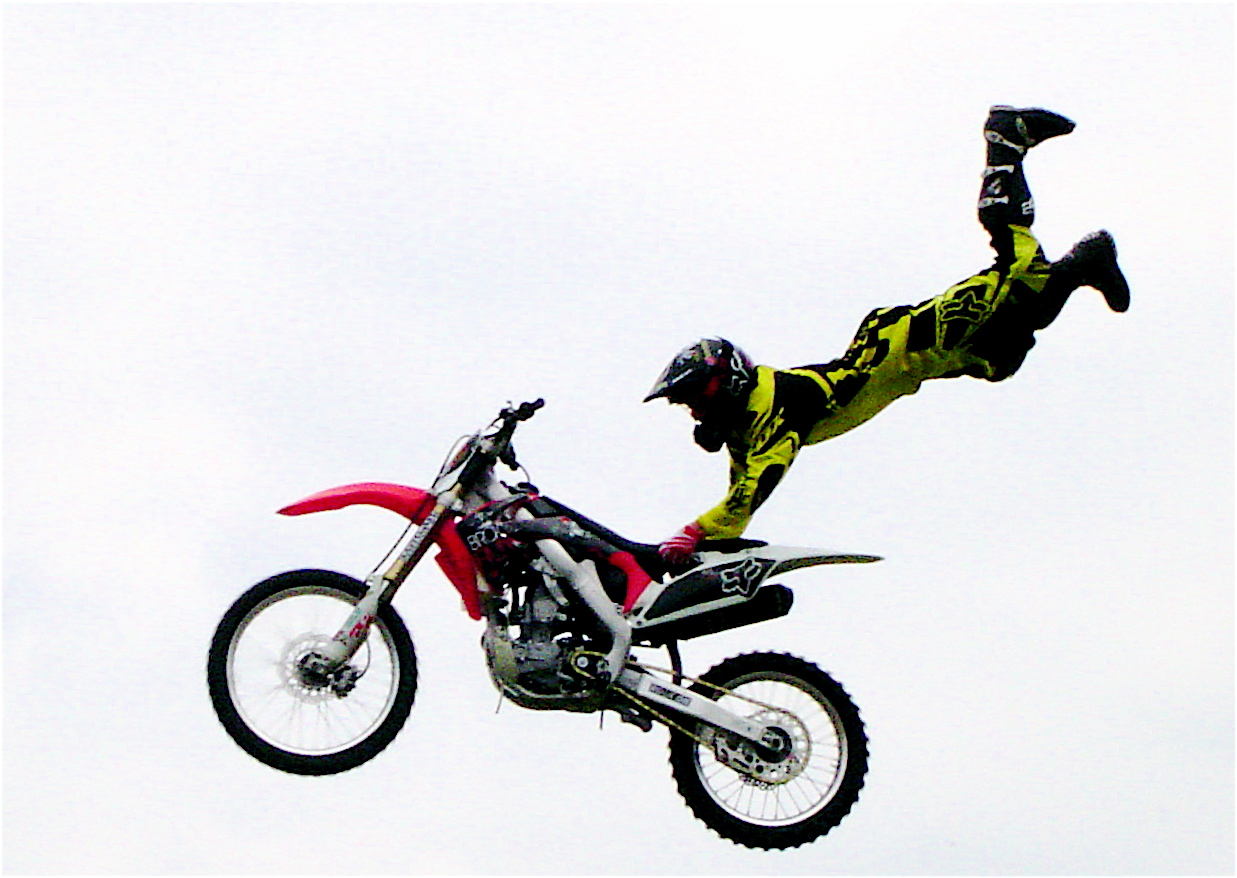 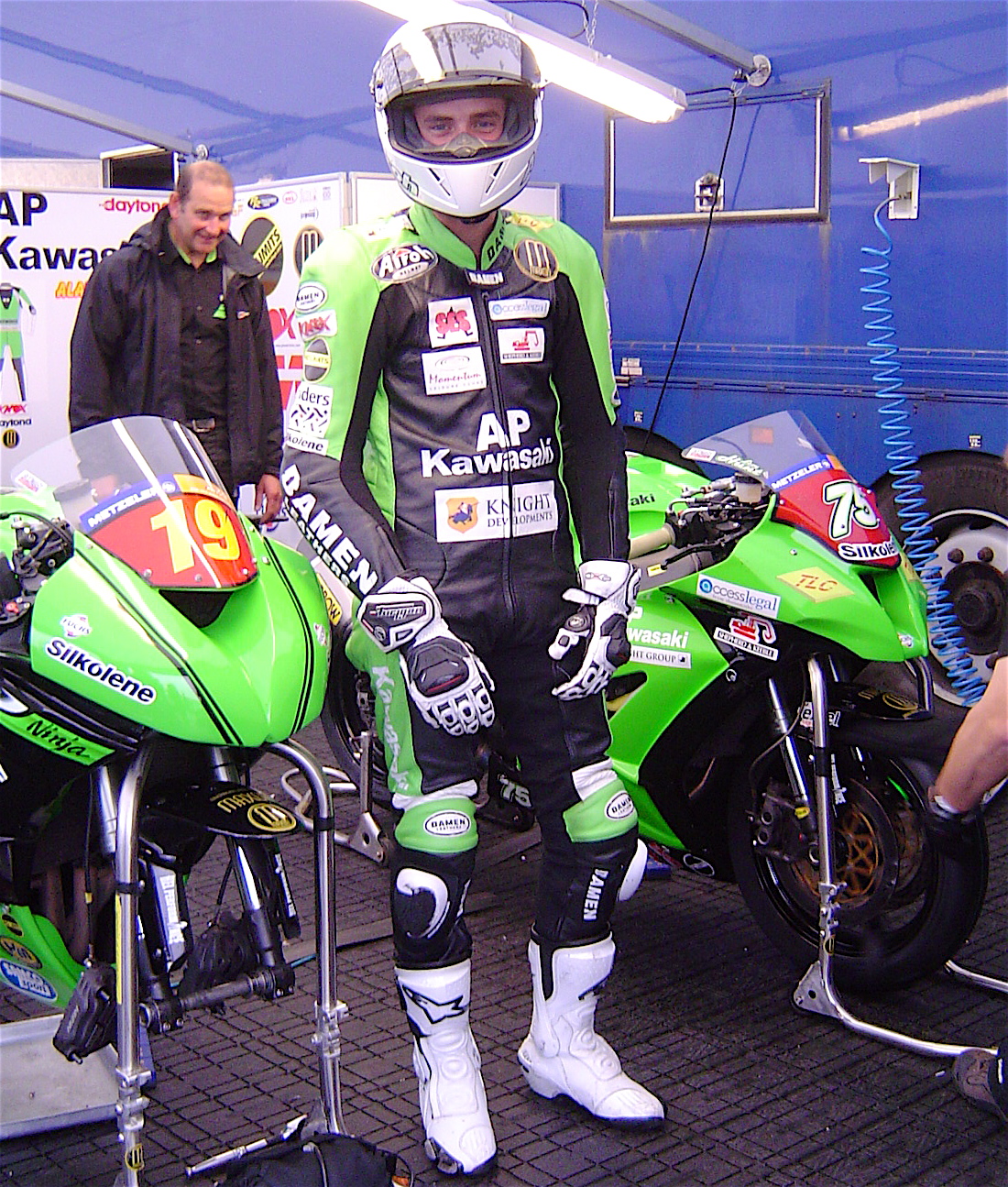 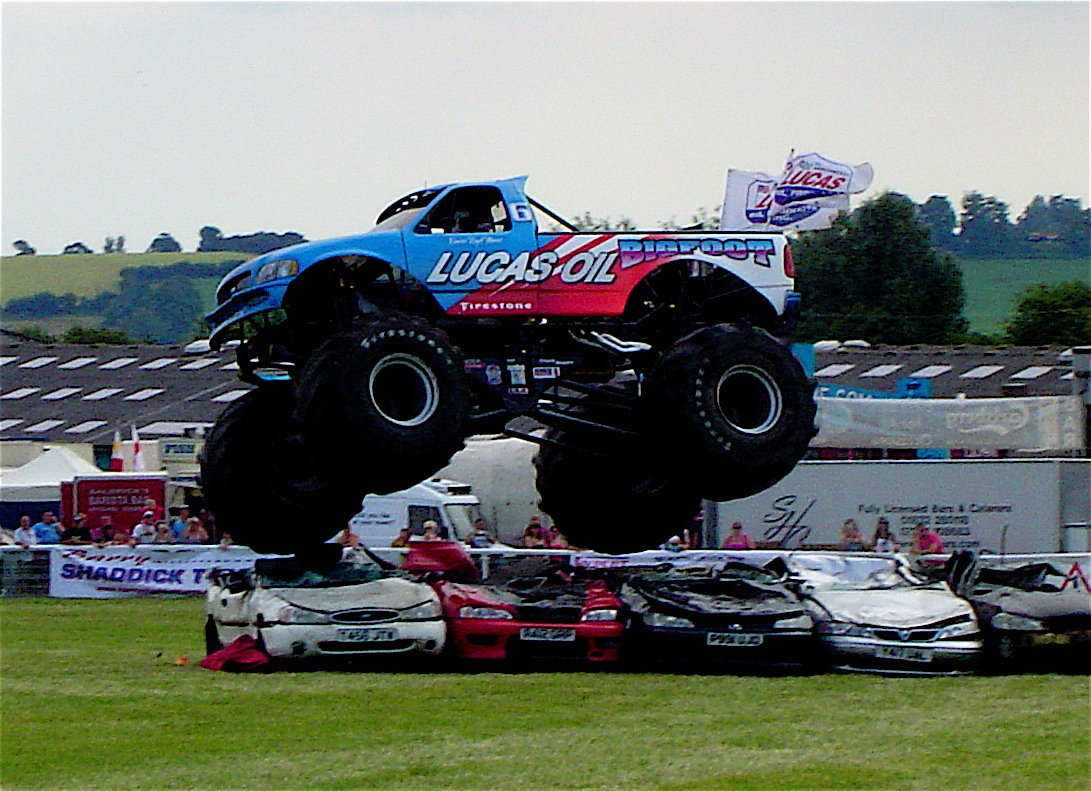 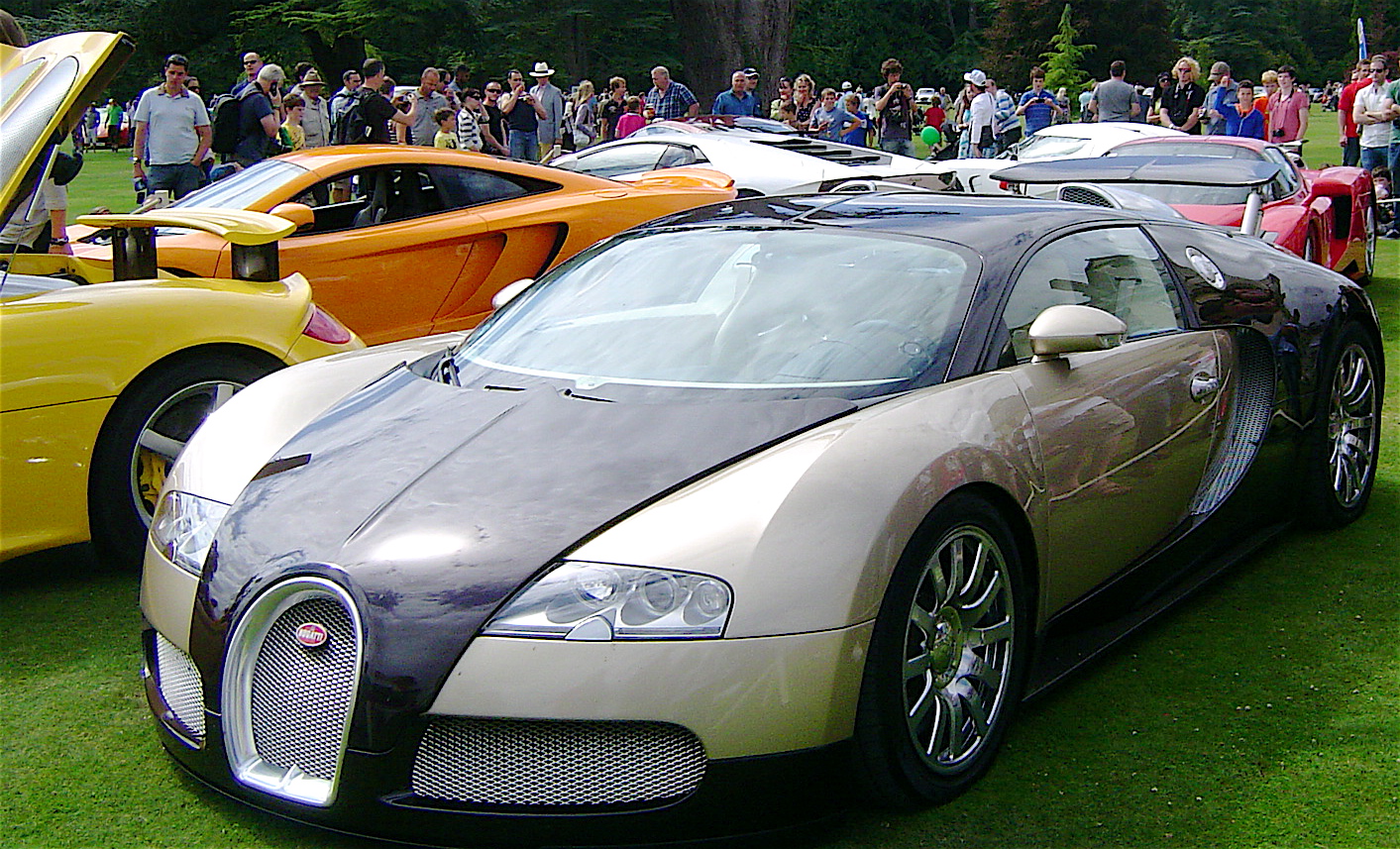 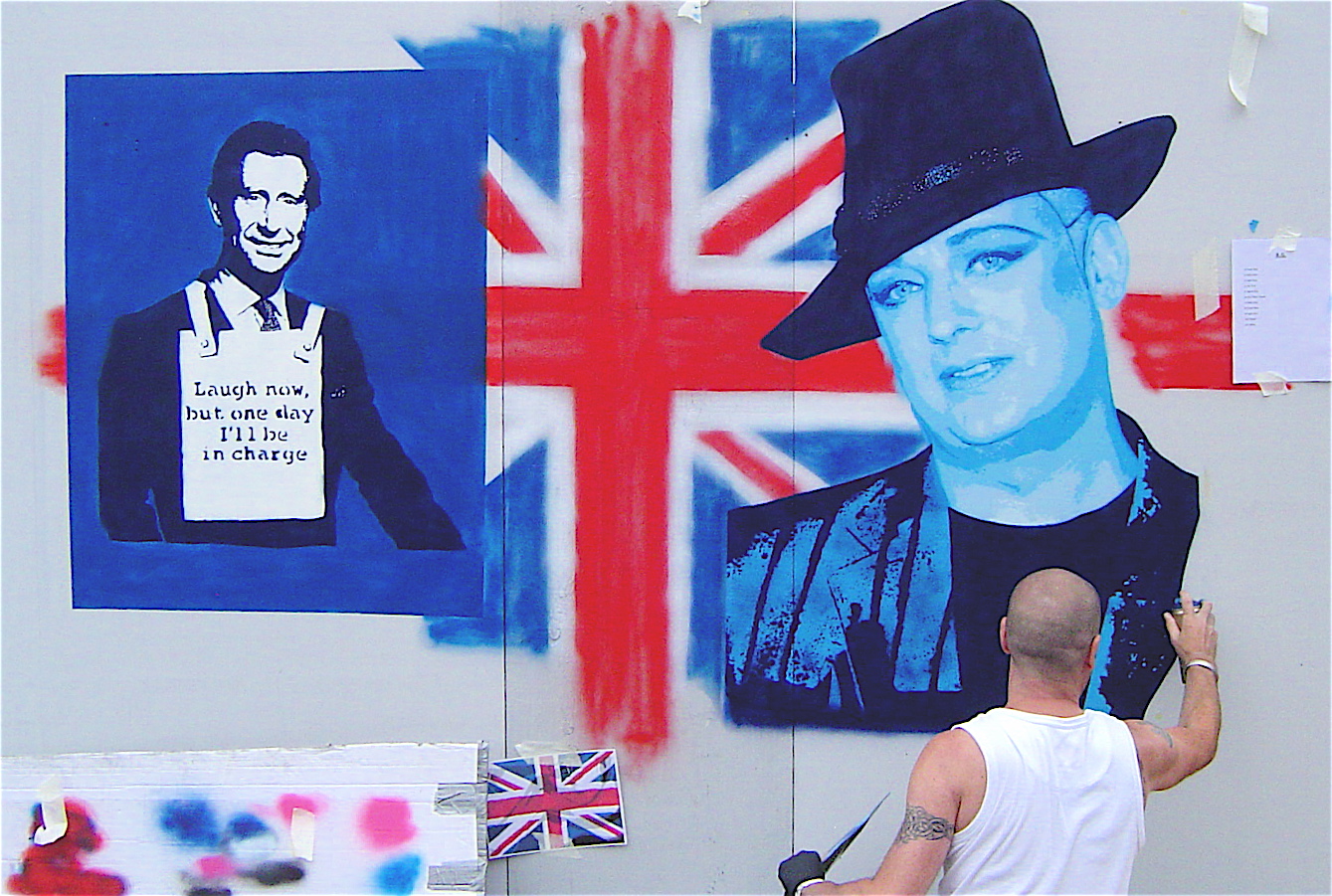